On the 16th of July 1918, Russia’s Imperial family were gunned down by leftist revolutionaries. The execution occurred in a house in Yekaterinburg where the prisoners spent their final months. In one fell swoop the dynasty which ruled Russia for three centuries was ended forever. The story of their demise is grimmer than fiction.

The dead consisted of:

And the loyal servants who accompanied Romanovs into exile:

The picture above is from 1913 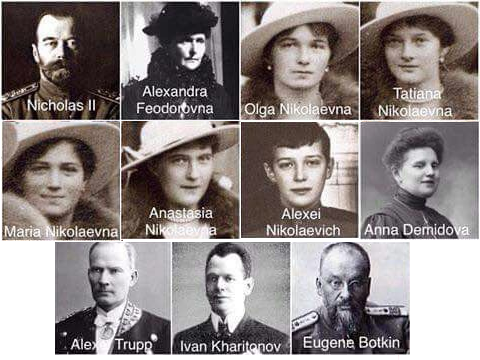 The Russian Civil War erupted soon after. Opposing the Bolshevik ‘Red Army’, was the counterrevolutionary ‘White Army’, a broad coalition that included supporters of the Tsar.

In 1918 the White Army was winning. When the Czechoslovak Legion threatened Yekatarinburg Lenin approved the ‘liquidation’ of Nicholas his family.  A potential rescue was too risky. 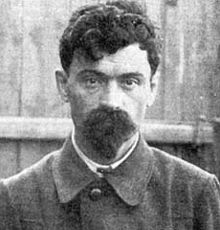 Fearing the local guards had grown sympathetic, the local command dispatched nine Bolshevik agents, under command of Peter Yermakov, to assist the execution. Non-ethnic Russians were deliberately chosen for the deed: Yakov Yurovsky  (pictured), the commandant at Ipatiev, was of Jewish extraction and Yermakov’s men were mainly Latvians and Hungarians.

At 1am Yurovsky woke the Romanovs. They were relocating and would wait in the basement until transport arrived.  Without questions, the prisoners dressed and followed Yurovsky downstairs. The prisoners were lined up against the wall of the small brick room, some sources say for a photograph. Chairs were brought for Alexandra and Alexei who, owing to his haemophaelia, was too weak to stand.

Yurovsky planned for a swift execution: he assigned each of his nine man firing squad a  prisoner to shoot. Only Yermakov was tasked with two.  To make the deaths quick and to prevent an excess of blood he instructed his men to aim for the heart.

Two soldiers were unwilling to shoot the women. Yurovsky dismissed them for failing their ‘revolutionary duty’.

Yurovsky then gave the death sentence. The Tsar could only shout ‘what?’ before he shot him dead. The commandant’s men opened fire but, to their surprise, the bullets ricocheted off the walls and their targets, grazing an executioner by the hand. Yurovsky halted his men, and as the smoke cleared they found Anna Demidovna, Tsarina Alexandra and her children alive on the ground. Anna Demidova exclaimed ‘God has saved me!’ but Yermakov dispatched her with his bayonet and Yurovsky shot the young prince in the head.

After another round of gunfire the Tsarina and her daughters were somehow still alive. Yurovsky ordered his men to bayonet them instead, which also failed. At last they killed the women with bullets to the head. Only later was it revealed Alexandra and her children had sewn diamond jewelry into their clothes, which protected them from both the bullets and bayonets of their executioners’ guns. The ordeal took a total twenty minutes. 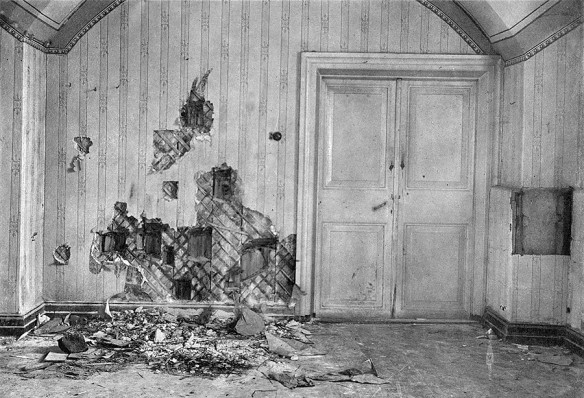 The aftermath of the shootings

The disposal of the bodies was botched even further. First the truck broke down then the sunken mine shaft they’d chosen for a grave proved too shallow. To Yurovsky’s dismay, the thoroughly drunk Peter Yermakov, who had organized the burial, had only brought one shovel. After stripping the corpses they tried to collapse the mine with hand grenades but this was ineffective. The bodies floated in the muddy water.

The following night Yurovsky and his men returned to relocate the bodies to a deeper, and more discrete mineshaft. The truck broke down again in the muddy bog however so, with dawn approaching, the murderers resolved to bury them on the spot. A 60 centimetre grave was dug and, to fit the cadavers, Yurovsky’s men doused them in sulfuric acid, tried to burn them and used their rifle butts to crush the skulls into the pit. By 6AM the grave was sealed and the sordid affair complete. 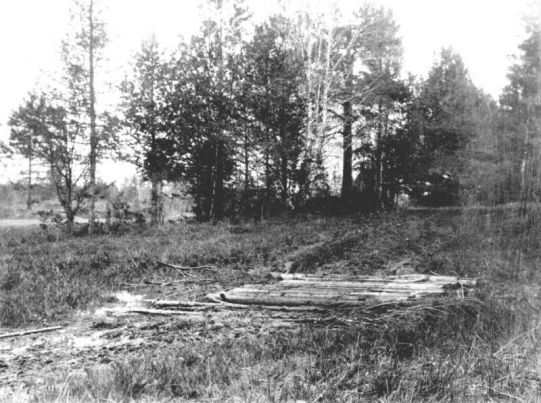 Was it justified? Nicholas II, despite being a family man, was an incompetent and tyrannical ruler with little regard for his subjects. His suppression of the 1905 Revolution and disastrous campaigns in the Russo-Japanese and First World wars cost thousands of Russian lives. Alexandra too was despised by the Russian people for her paranoia and connection with the mad monk Rasputin.

The children and servants however, were innocent.  None of the victims were given a trial.

“The Tsar’s family was a victim of the principle that form the very axis of monarchy: dynastic inheritance, for which their deaths were a necessity”

Only by eliminating the Romanov family in its entirety could the Bolsheviks ensure the Tsars never reclaimed the throne. A lost heir would be a rallying point for enemies of the revolution and threaten the Soviet Union’s existence. All it would take would be for one of the Romanov daughters to wed a foreign prince for a foreign army to march on Moscow with local support.

There were precedents. When Oliver Cromwell and the forces of Parliament executed King Charles I of England, his son survived. The prince returned with an army and restored the monarchy with himself as Charles II. England’s Republican experiment only lasted 11 years.

After Napoleon’s fall, the brothers of Louis XVI reversed the French Revolution by reinstating the Bourbon Dynasty.

The Tsar’s children had to go. By killing the Alexei and his sisters, the Bolsheviks ensured a Tsarist restoration could never take place. In their eyes that would save thousands more innocent lives.

The bodies were excavated in 1991. DNA analysis confirmed all the prisoners at Ipatiev were buried there, disproving the various Anastasia pretenders who sprung up in the 1920s. 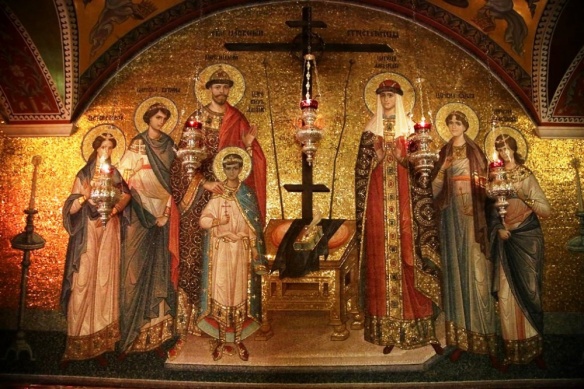 When the Soviet Union fell Russians were free to see the Romanovs in a different light. Boris Yeltsin denounced their murder and in 2000 the Russian Orthodox Church canonised the Romanovs and their servants. Today 60% of Russians view their execution as an ‘unjustified atrocity’.

3 thoughts on “The Murder of the Romanovs”