On  November 11th 2017, 60,000 demonstrators celebrated Poland’s 99th Independence Day in Warsaw in a bout of flag-waving nationalist frenzy.  It was Europe’s largest public demonstration in recent years and the biggest gathering of its kind this century. Activists, some wearing balaclavas and displaying fascist insignia, marched for Catholic identity and ethnic nationalism, chanting against Jews, Muslims, gays, liberals and the EU.

At first glance, the Independence Day March seems innocent enough. Poland, its rough history considered, has a right to feel patriotic. The rhetoric surrounding this demonstration, however, was especially disturbing.

The march attracted far right activists from across Europe, including Britain’s Tommy Robinson, a former EDL leader. Richard Spencer, the leading American white nationalist, was invited but denied a visa. 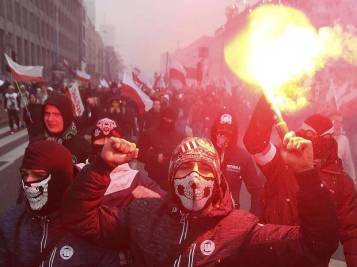 I did an earlier post on the Charlottesville Riot and the shared ultra-conservative and xenophobic messages of both events calls for comparisons. The Warsaw March was something the American far-right could only dream of. Saturday’s marchers waved red flares, not tiki torches but their message was similar: nativism, white nationalism and bigotry. Their numbers were greater than a meagre 2,000.

Like Charlottesville, counter protesters opposed the march though they numbered only 5,000. They were organised by Antifa Warsaw. Unlike Charlottesville, the Right had the obvious upper hand: ethnic nationalism is a far stronger force in Poland than the US, and in a region feeling the brunt of the Syrian refugee crisis and the rise of Russia, far more significant.

In the past police have clashed with protesters on these Independence Day Marches, but since the ascendance of the far-right Law and Justice Party in 2015, which embraces the politics of conservative nationalism, the demonstrations have largely been encouraged. Only 45 were arrested on Saturday, all of whom were leftist counter-demonstrators. No injuries or deaths occurred.

It is worth noting these elements did not represent the march as a whole. According to the BBC, a demonstrator claimed only 30% were committed neo-fascists. Nevertheless, 18,000 fascists parading is still unsettling.

Extremist elements were condemned by possible sympathisers. President Andrzej Duda, of eurosceptic Law and Justice Party, said xenophobia, anti-Semitism and violence have ‘no place in Poland.’  Duda has accepted 0 refugees since the crisis began and previously claimed ‘the affirmation of homosexuality will be the downfall of civilization’.

Breitbart News, the self-described ‘platform for the alt-right’ described the march as ‘hijacked by white nationalists’ while downplaying its significance by stating xenophobia is commonplace across the world.

I was most surprised to find Sputnik, the mouthpiece of the Putin Administration, condemned the march, describing it as ‘the largest gathering of bigots in Europe and perhaps the world’. Russia has previously encouraged the resurgence of nationalism in Europe as a means to weaken the European Union.

After centuries of domination by foreign powers, Poland was occupied by Nazi Germany, who committed their most atrocious evils on Polish soil, followed by over half a century of Soviet backed totalitarian socialism. Their common enemy shaped a cohesive national identity based on the Catholic faith and Polish identity. Religion, like race, is exploited as an identity marker to differentiate native Poles from outsiders.  As of 2017 Poland is arguably the most right-wing state in Europe. 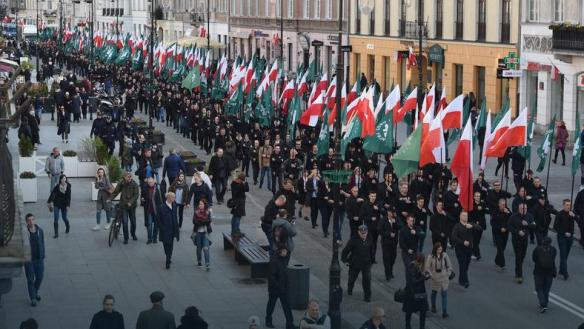