The Cartoon History of the Universe is a three part, 19 volume book series by American cartoonist Larry Gonick about the history of mankind up to 1492.  It presents detailed and well researched material in a humorous and accessible black and white comic style. Cartoon History was originally serialised as a comic book series from 1978-1990, when the first book was published.

A smaller two part series, Cartoon History of the Modern World takes off where it leaves, but is shorter and slightly more Eurocentric.

In Cartoon History, Gonick’s avatar – a frizzy haired Einstein-esque professor explains the historical narrative while the cartoon panels provide visual representation and gags. The often raunchy and irreverent humour ranges from absurdism to parody, anachronisms and dramatic irony. Running gags, like Byzantines’ penchant for eye gouging and Central Asian nomad’s adversity to vegetables, play a big part. Sometimes the events are funny in their own right. Who would know, for example, that (pre-Islamic) Meccan spies triggered war with Ethiopia by pooping in a church? 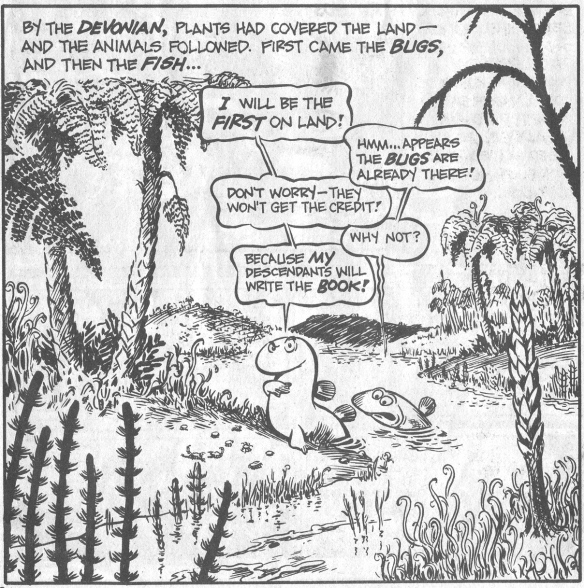 Despite its accessible style, content is factual and dense. Gonick explores the lives of history’s big personalities and ordinary men and women with an eye for economic trends and cause and effect. Interesting trivia and gory details accompany the main narrative, often as footnotes. Cartoon History’s topical weight and adult appeal distinguish it from less serious kids’ books like Horrible Histories.

Book One surveys the Big Bang, dinosaurs, and human origins in the first third before moving to the ancient Mediterranean civilisations, with a particular focus on Israel and Greece.

Book Two alternates between the great civilisations of Rome, India and China, including the origins of Hinduism, Buddhism, Chinese philosophies and Christianity. Jesus is portrayed in historical terms as a wondering Jewish preacher called Jeshua Ben Joesph. Gonick has received criticism for his skeptical attitude. 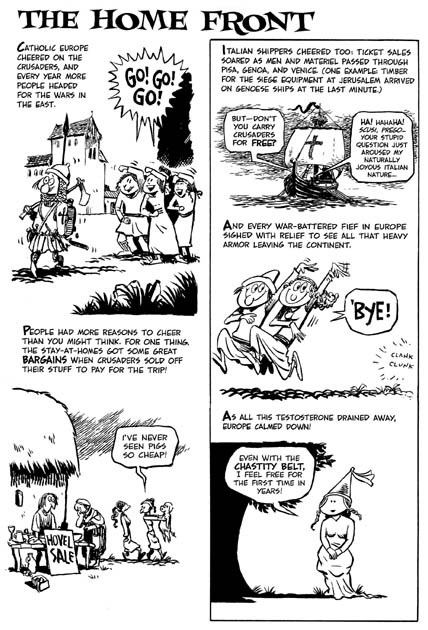 Book Three covers, amongst many, the rise of Islam, Ethiopia, North Africa, the Turks, Byzantine Empire, Crusades, Mongols, Black Death and the Renaissance. Having owned the book for many years I am biased, but do believe this is the best. Gonick’s artwork and humour are better developed, content is more varied and the time period is most interesting. The first volume ‘No Pictures Please’ is especially pertinent, giving an accurate explanation of the life and times of Muhammad and the origins of the Sunni/Shia split, all without idolatry. 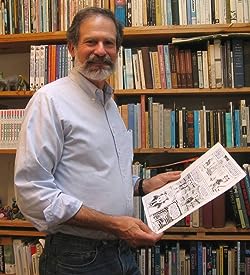 Larry Gonick (1946-) was born in San Francisco and studied Mathematics at Harvard.  From 1977 onwards he wrote a series of ‘cartoon guides’ on a variety of subjects including algebra, physics, computer science and tax reform.  The Cartoon History of the Universe, which he serialised from 1977, was his most successful work, and named one of the top 100 comics of the 20th century by Comic Journal. Jackie Kennedy was an early fan and helped get it published. Carl Sagan described it as “a better way to learn history than 90% of school textbooks”.