Moses is the prophet who wrote the Hebrew code of laws. He is Judaism’s most revered figure and is mentioned in the Quran more than any other person. According to Jews, Christians and Muslims, Moses led the Hebrews out of slavery in Egypt and received the Ten Commandments from God.

According to the book of Exodus, which Moses allegedly wrote, the Hebrews were slaves in Egypt at the time of his birth. When the pharaoh ordered the death of all newborn Hebrew boys to quell their population, Moses’s mother hid him in the bullrushes of the Nile. Here the pharaoh’s daughter found him and raised him as her own. Moses grew up in the Egyptian court until discovering his true parentage. He murdered an Egyptian slave-driver and fled to Midian, where he met his wife, Zipporah.

Instructed by a burning bush, Moses returned to Egypt. He promised the Hebrews a ‘land of milk and honey’ if they submitted to Yahweh, the God of Israel and demanded the pharaoh release his people. He refused, and ten plagues then befell his country. Forced to comply, the pharaoh freed the Hebrews but then sent his army against them, trapping them against the Red Sea. Moses parted the sea and allowed the Hebrews to cross. It then closed and drowned the pharaoh and his army.

God spoke to the Hebrews through Moses, who could see and hear him, atop Mount Sinai and dictated his laws – the Ten Commandments, an eye for an eye. Moses slaughtered the 3,000 who worshipped a golden calf instead then led the Hebrews through forty more years in the wilderness. When the Midianites tried to turn the Hebrews from their god, Moses ordered their destruction. He died on Mount Nebo by the banks of the Jordan River.

The Quran affirms the Exodus narrative, adding the following details:

Was Moses real? The Torah claims Moses lived around 1100 BC, but historians have found no evidence in archaeology or contemporary Egyptian records. Most consider him a mythical figure, believing the Hebrews grew out of Canaan’s indigenous population. If a component of their people came from Egypt, their numbers were small.

‘Moses and Monotheism’ (1939) by Sigmund Freud claims the prophet was an Egyptian nobleman who supported the heretic Akhenaten. This pharaoh had tried to replace the Egyptian pantheon with a single deity named Aten, but when he died, the priests of Egypt destroyed his cult and restored the old gods. According to Freud, Moses escaped the purge and brought his Egyptian god to Israel. There Aten became Yahweh. While mythologist Joseph Campbell embraced Freud’s theory, both theologians and Egyptologists reject it.

According to some Islamic traditions, Moses is buried in Nabi Musa in the West Bank, Palestine.

Santiago is the Spanish name for Saint James the Greater, one of the Twelve Apostles, patron saint, and mythical hero of Spain and Portugal. In Catholic Spanish iconography, Santiago is evoked not only as the humble fisherman from the Bible but a crusader knight and conquistador. Five cities are named after him, including the capital of Chile. He is Sao Thiago in Portuguese.

The Spanish Iago derives from the Hebrew Ya’akov, as Saint James was known in his lifetime. Like most Biblical names, it differs according to language:

The English Jacob derives directly from the Latin Iacobus, while the more common James is an Anglicisation of the Italian Giacomo.

Of the European languages, the Russian ‘Yakov’ is closest to the original Hebrew.

According to the Bible James and his brother John the Apostle were cousins and early disciples of Christ. Santiago was known for his violent temper – once calling for God to rain fire upon a Samaritan town. He was beheaded by Herod Agrippa in 44 BC, and was thus the first Christian martyr and the only one recorded in the New Testament (Acts).

The 12th century Historia Compostelana claims Santiago proselyted in northwestern Spain (Galicia) before returning to Jerusalem, and was carried there by angels when he died.  The Bible makes no mention of these episodes however, and historians and theologians doubt its veracity.

By 700 AD, the Spanish had claimed Iago as their patron saint. His body is said to reside in the Galician city of Santiago de Compostella. A legend arose that Santiago descended from heaven and fought at the 9th century Battle of Clavijo against the invading Moors.  This earned him the moniker Santiago Matamoros, or ‘Saint James the Moor Slayer’.

In the Middle Ages, the Cathedral of Santiago was the most popular place of pilgrimage in Europe. The famous ‘Camino de Santiago’ or ‘Way of Saint James’ attracted thousands of pilgrims  in the 10th and 12th centuries.

In the 21st century the route has seen a significant revival. attracting not only pilgrims and tourists but avid hikers and seekers of spiritual growth, making it a European counterpart to the USA’s Oregon and Appalachian Trials. The Camino de Santiago was inscribed as a UNESCO world heritage site in 1993. 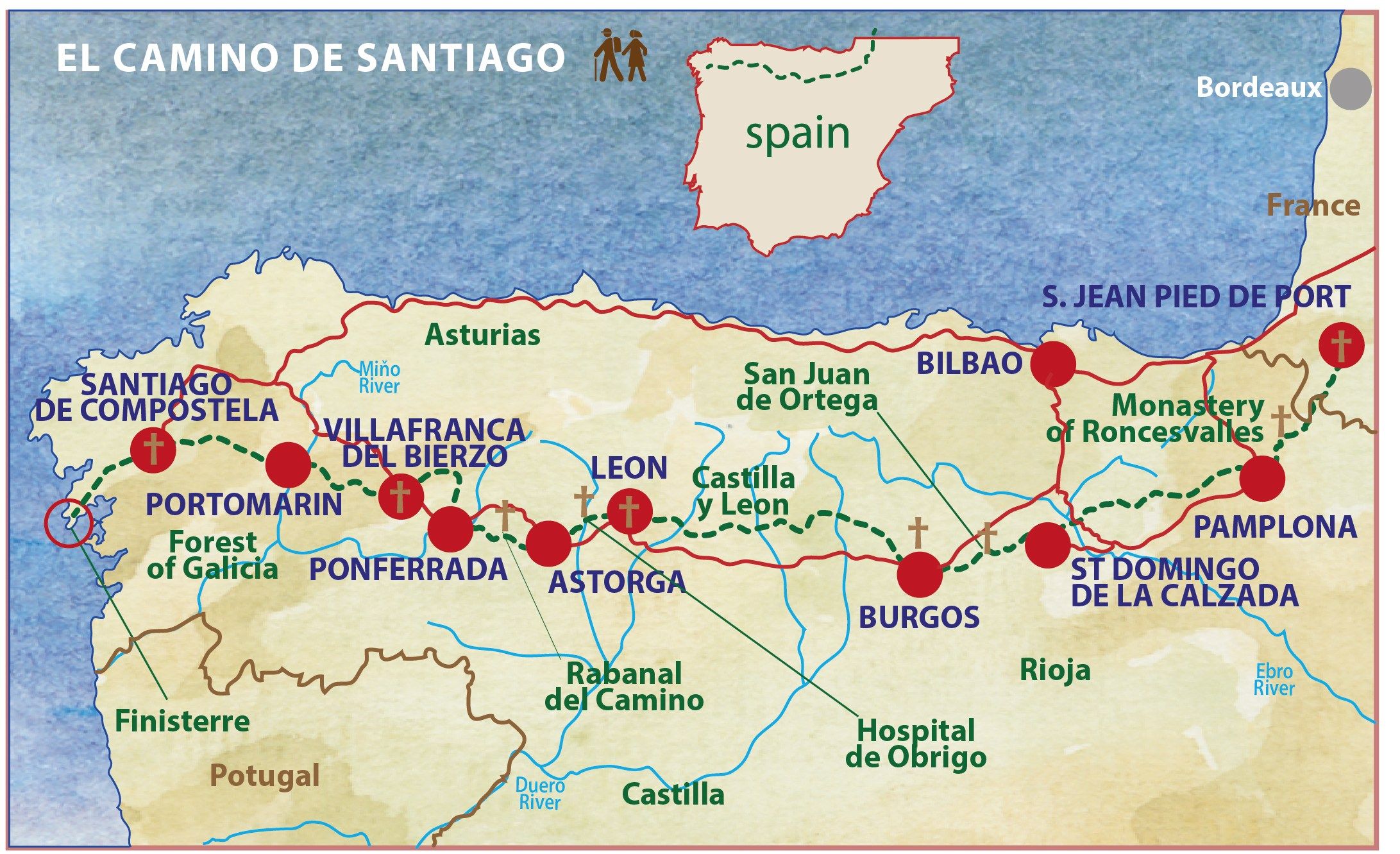 Santiago, Chile was founded by Spanish conquistador Pedro de Valdiva in 1541 on Incan land. Today it is a highly developed capital city of over 7 million inhabitants and the 7th largest city in Latin America. Its namesakes include Spain’s Santiago de Compostella and cities in Cuba, the Dominican Republic and the Philippines. San Diego, California is named not for Saint James but Didacalus of Alcala, a 15th century missionary.