The Khmer Rouge ruled Cambodia from 1975-1979. Theirs is among the most brutal regimes in history. In pursuit of a utopia, the Khmer Rouge killed 2 million people in four years through starvation, execution and forced labour – one-quarter of Cambodia’s population.

The leaders of the Khmer Rouge, or the ‘Communist Party of Kampuchea’, were middle-class, French-educated socialists inspired by Stalin and Chairman Mao. Pol Pot (below), or Brother Number One, operated from the shadows – until 1979 few even knew who he was. The Khmer Rouge saw Cambodia’s impoverished peasants as the only force free from the corruption of modern capitalist society, and the force they could harness to take control of the country. To eliminate inequality for good, Cambodian society needed to be destroyed and rebuilt from the ground up, by whatever means necessary.

Cambodia gained independence from France in 1953 under Norodom Sihanouk, who tried to play both sides of the Cold War. He called the guerrillas in the countryside ‘red Khmers’, and the name stuck. 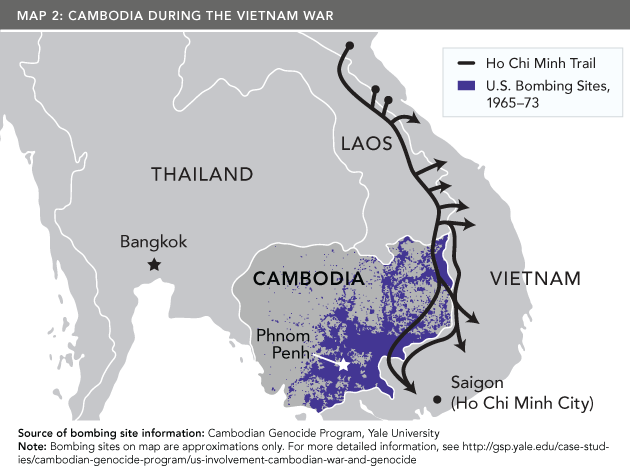 In 1973, the Nixon Administration began bombing the jungles where the Viet Cong operated from across the border. That year, pro-American general Lon Nol took power in a coup. As, American bombs devastated the countryside, the peasants who lived there came to detest the government and its city-dwelling backers.

Year Zero began in 1975 when the Khmer Rouge took over Pnom Penh. On the pretence of an American bombing raid, they evacuated the entire city and forced everyone to abandon their property. Soldiers and members of the old regime were rounded into the Olympic Stadium and shot.

The Khmer Rouge divided Cambodia into two groups: Old People and New People. Old People were peasants who lived in the old, liberated zones in the countryside, whereas New People were relocated, city dwellers.They were distributed into agricultural collectives and forced to work ten-hour days without pay. All public institutions, including hospitals and schools were closed. By 1979, up to 80% of Cambodians had malaria.

The Khmer Rouge were determined to move as quickly as possible to a rural communist society. They envisioned a land free of private property and commerce, where everyone worked as rice farmers – the purest occupation. Everyone wore the same dyed black clothing with red and white headbands and car-tyre sandals. Individualism of any form was prohibited. The only acceptable possession was a spoon.

The new rulers of Cambodia call 1975 “Year Zero”, the dawn of an age in which there will be no families, no sentiment, no expressions of love or grief, no medicines, no hospitals, no schools, no books, no learning, no holidays, no music, no song, no post, no money – only work and death.

Khmer Rouge cadres targeted anyone suspected of impeding their vision; intellectuals too steeped in the old way of life. Those who complained or spoke out were chosen for ‘re-education’ which in practice meant torture and death. Victims included:

To save bullets, the Khmer Rouge used rifle butts and sharpened bamboo sticks. They threw their victims into mass graves, dubbed ‘killing fields’. Children of political victims were killed as well, lest they grow up to take revenge. A Chankiri tree outside Pnom Penh still bears the marks of the infant heads bashed against its trunk. A Khmer Rouge adage was ‘to keep you is no benefit, you destroy you is no loss.’

Most Khmer Rouge cadres were illiterate peasants, both men and women. The most fanatical were teenagers who had grown up in the civil wars.

In 1979, tensions between Cambodia and neighbouring Vietnam reached a boiling point. The communist Vietnamese invaded. They overthrew the Khmer Rouge and set up a new government. Led by China, the international community condemned the invasion and continued to recognise Pol Pot’s ‘Democratic Kampuchea’ as the country’s legitimate government until 1991. The Khmer Rouge survived in the remote countryside until Pol Pot died in 1998.

Although they ultimately failed, the Khmer Rouge changed Cambodia for good. Today the old political elite and much of Cambodian high culture are no more. Many of the country’s leaders are former associates of Democratic Kampuchea.