The Sassanian Empire (224-651) was the last pre-Islamic dynasty to rule Iran. They called their dominion ‘Iranshahr’, meaning ‘Empire of Iran’. The Sassanians reinstated native Persian rule after centuries of foreign dominion and codified Zoroastrianism as their state religion. They were nemeses of the Roman Empire, and the two powers fought incessantly. The Sassanians ruled modern Iran, Iraq, the Persian Gulf, Caucasus and the Stans of Central Asia (except Kazakhstan).

The Sassanians were an old Persian family claiming descent from Cyrus the Great. Having conquered Persia in 330 BC, the Macedonians ruled three centuries. The Parthians who followed were of north-east Iranian stock but adopted Greek customs. In the third century AD, Ardashir of the House of Sasan overthrew his Parthian overlords and was crowned ‘Shahanshah’ – king of kings. His dynasty turned the feudal Parthian Empire into a centralised, urban state and restored the Persian Empire of old.

Zoroastrianism was the Sassanian state religion. The high priest Kartir put its oral traditions to paper and pushed an orthodox Zoroastrianism that left no room for differing interpretations. The clergy became a privileged and influential caste alongside the seven noble families of Iran.

Two heresies threatened the Sassanian order.  Early in the Sassanian Empire, the Manichaeans accepted a new prophet and threatened the clergy’s hold on power. The followers of Mazdak (Mazdakites) arose in the 6th century. They were a proto-communist cult advocating social revolution. Spurred by the clergy, the Sassanian rulers uprooted both and killed their prophets.

The backbone of the Sassanian army was its cataphracts – armoured men on armoured horses fighting with mace and lance. The Romans copied their design and it later influenced European knighthood. The Sassanians also used Indian elephants in war.

The Sassanian Empire was one of five world powers alongside Rome, Ethiopia, India and Tang China. Their tug-of-war with the Romans over Armenia and Mesopotamia lasted four centuries. In 260, Shapur I annihilated a Roman army at Edessa and inflicted one of Rome’s worst-ever defeats. Emperor Valerian was taken captive and made Shapur’s footstool until he died. In the west, the Sassanians defended Iran against migrating Hunnish and Turkic tribes.

Khosrow I (reigned 531-539) gave the empire a second wind. He reformed the inefficient tax system and eased persecution of Christians and Jews while crushing the Mazdakites. His occupation of Egypt, Anatolia and Yemen brought Sassanian Persia to its greatest extent. When the Romans closed the Athenian Academy in 529, Khosrow welcomed its scholars to his court. An admirer of Plato, he sought to emulate the ideal philosopher-king.

The final Roman-Persian war of 602-628 bled the empire dry. Four years later, the Arabs, now united under Islam, invaded and destroyed the Sassanians within twenty years. In focusing so much on the Romans, the Sassanians had neglected their neighbours to the south. The last Shahanshah, Yazdegerd III, fled east and was murdered for his purse.

Today Persians consider the Sassanians the most authentically ‘Iranian’ Empire. The older Achaemenid Persian Empire belongs to an ancient, almost mythical past. By contrast, the Sassanians left ample records. They created truly Persian literature, practised a Persian religion and wrote in a Persian script. Chess was popularised and backgammon invented in the Sassanian court. Stories that would later make Ferdowsi’s ‘Shahnameh’, the Iranian national epic, were first collated in Sassanian times. The academy at Gundeshapur translated hundreds of philosophical and medical texts from Greek and Sanskrit into Persian which in turn laid the foundations of the Islamic Golden Age. 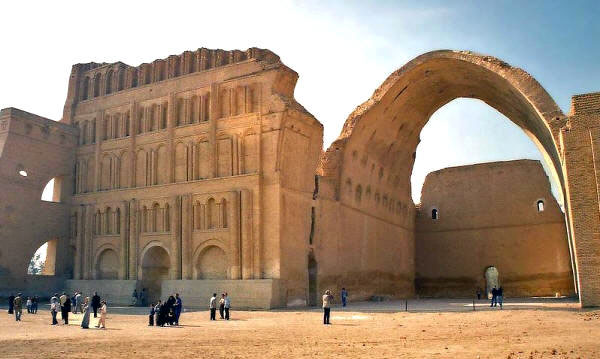