The Irishman (2019) is the latest film from director Martin Scorsese. Like GoodFellas (1989) and Casino (1995), it is a crime epic set in the glory days of the American mafia. Scorsese’s muse Robert De Niro stars alongside genre mainstays Al Pacino and Joe Pesci in their first film together. Steven Zaillian of Schindler’s List wrote the screenplay. Released on Netflix, it runs a hefty 3.5 hours. The film tells the story of Irish-American mobster Frank Sheeran and the 1975 disappearance of union boss Jimmy Hoffa. It is based on Sheeran’s biography, ‘I Heard You Paint Houses’ – code for contract killing.

Frank Sheeran (De Niro) is a truck driver in 1950s Philadelphia when mobster Russell Buffalino (Pesci) takes him under his wing. Sheeran’s service in WW2 taught him Italian and desensitised him to killing. Through Buffalino he meets Jimmy Hoffa (Pacino), charismatic and blustering president of the International Brotherhood of Teamsters, the largest trade union in America. Frank murders on Hoffa’s behalf and builds a name for himself in the underworld until circumstance and mob politics force him to choose where his loyalties lie.

Digital ‘youthification’ technology makes De Niro, who is 76, and Pacino, 79, able to play younger men. Though De Niro’s face is believable – even his artificial blue eyes – his stiffness and gait betray his age. Surprisingly Pacino pulls it off. 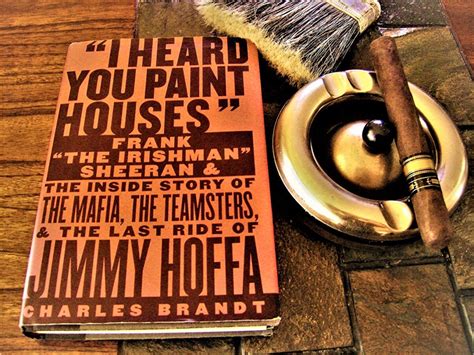 The Irishman takes liberties with fact. Its source material is based on Sheeran’s confessions to lawyer Charles Brandt before he died in 2003. The 25-30 murders he details, however, are officially unattributed to this day, the insinuation the mob killed Kennedy is disputable. They did help get him elected, however. JFK’s father made his fortune bootlegging in the 1930s. In 1960 he promised the mob his son would overthrow Castro, and restore Havana to the gangsters’ playground of old. The Bay of Pigs Fiasco resulted. Former FBI agents claim Sheeran was simply a crooked union official. He was violent, sure, but never murdered anyone, or at least was never caught. De Niro stated he believed Sheeran’s account, though the film ultimately tells ‘our story, if not the actual story.’

The Irishman deals less with the mafia itself and more its characters’ journeys. Catholic themes of sin and atonement feature, as they do in many of Scorsese’s works. I loved Hoffa and Tony Pro’s ‘meeting scene’ in the third act and the haunting ending. De Niro and Pacino give their finest performances in years and Pesci, who left retirement for his role, is superb as calculating don Russel Buffalino. Though I am hesitant to say it tops GoodFellas without rewatching, The Irishman is easily Scorsese’s best since.