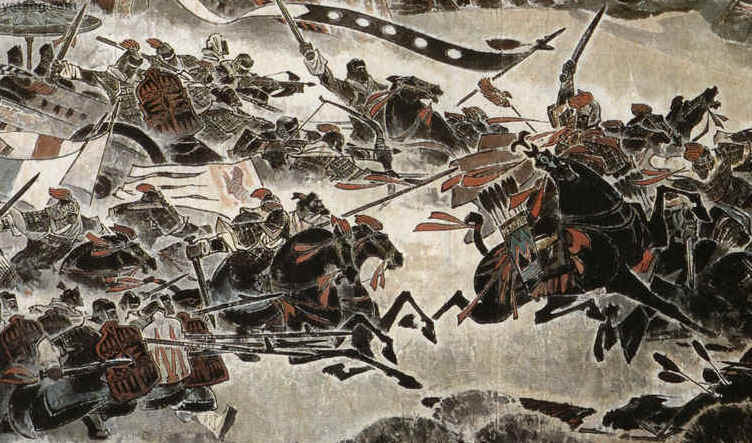 The Xiongnu were the first nomadic empire and the greatest threat China had faced. From 209 BC to AD 89 they ruled a confederacy of nomadic tribes and tributary states across the Asian Steppe. Xiongnu horsemen combined the composite bow and iron stirrups to devastating effect and the echoes of their fall were felt as far as India and Rome.

The Xiongnu’s origin is uncertain. They could have been Turkic, proto-Mongol, Iranian or Siberian. Like other steppe peoples, they were shamanists who worshipped their ancestors, the sun, moon and sky. The only written records come from the Chinese, who viewed them with contempt. 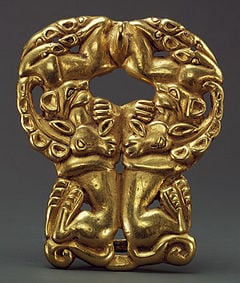 The Xiongnu enter Chinese history as nomads in the Yellow River’s northern bend. Their first known leader, or chanyu, was called Touman. His warriors pillaged China until Qin Shi Huangdi, the first emperor, pushed the Xiongnu into the Gobi Desert and constructed the Great Wall of China to keep them out.

Huangdi died in 210 BC and his dynasty followed. In 209 BC, Touman was murdered by his son Maodun. A ruthless and charismatic figure, Maodun Chanyu united the northern tribes and founded an empire. He expelled the Yuezhi, a rival people, from western China, subjugated the cities of the Tarim Basin, and crushed a Chinese army. Instead of invading, however, he held the country ransom.

The Han Dynasty placated the Xiongnu with gold and princesses. Maodun’s people grew accustomed to southern riches and took to wearing silk and living in Chinese style homes. They built cities, kept slaves and farmed but never lost their warlike edge. Along with Chinese tribute, the Xiongnu controlled the Silk Road, trading horses from Mongolia, furs from Siberia and jade from the Altai Mountains. They left burial mounds full of tapestries and golden ornaments.

The Han-Xiongnu War began in 129 BC. The humiliating treaties cost China dearly and were often ignored by Xiongnu raiders. Defeating them in battle, however, required matching the Xiongnu strategy. China had few horses of its own.

Emperor Wu dispatched explorer Zhang Qian westward to propose an alliance with the Yuezhi, now based in Afghanistan. They refused. Next, he contacted the city Dayuan, hitherto unknown and far to the west. Its inhabitants were Greek speakers, remnants of Alexander’s conquest, and they bred powerful steeds.

In the War for Heavenly Horses, Emperor Wu acquired 3,000 mounts from Dayuan (and conquered the Tarim Basin). With them he equipped a new cavalry corps, armed with bows and lances in the Xiongnu style.

Buttressed by their ‘Heavenly Horses’, a 40,000 strong Han army thrust into the Xiongnu heartland and defeated them in 119 BC during a sandstorm. The Xiongnu collapsed into civil war and the Han gained the upper hand.

The southern branch were conquered In AD 89. They arose again in the 300s, settled in China and assimilated.

The northern Xiongnu, meanwhile, were forced west. They are mentioned once more then disappear from the pages of history. 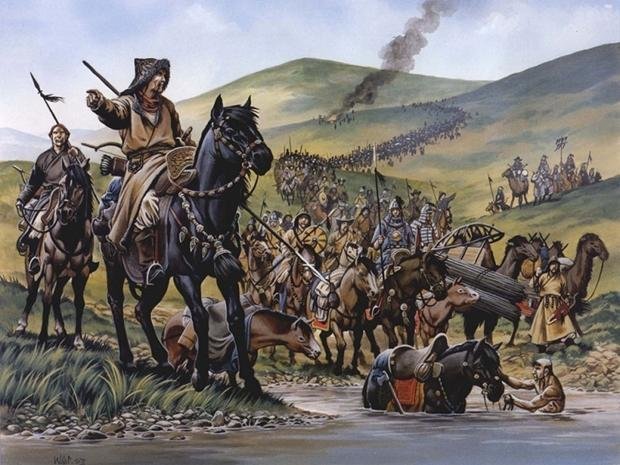 Or did they? Three centuries later the nomadic Huns appeared on the fringes of Europe. Could they, the despoilers of Rome, have been a Xiongnu remnant, their proud history lost in the long migration west?  Since Joesph de Guignes in the 17th century, scholars have thought so, though many disagree.

Roman, Buddhist and Hindu writers all report nomadic invasions after the fall of the Xiongnu. Each group may or may not have been their descendants:

1 thought on “The Xiongnu”