Population Y is a proposed ‘ghost population’ who may have inhabited South America before Palaeo-Indians crossed the Bering Landbridge 15,000 years ago. Unlike Native Americans, whose ancestors came from Siberia, Population Y was more closely related to Melanesians and Australian Aborigines. Slim evidence lies in ancient bones and modern DNA.

The prevailing narrative is Native Americans share a common origin. 15,000 years ago humans from Siberia crossed a land bridge spanning the Bering Strait. As the Ice Sheets melted, their descendants dispersed across the continent and became the indigenous peoples of America – everyone from the Incas to the Algonquin. In 2012 Harvard scientists sequenced genomes from 52 indigenous groups and concluded they shared common DNA with this founder group – represented in the mDNA haplogroups A, C, D and N.

However they may not have been the first. 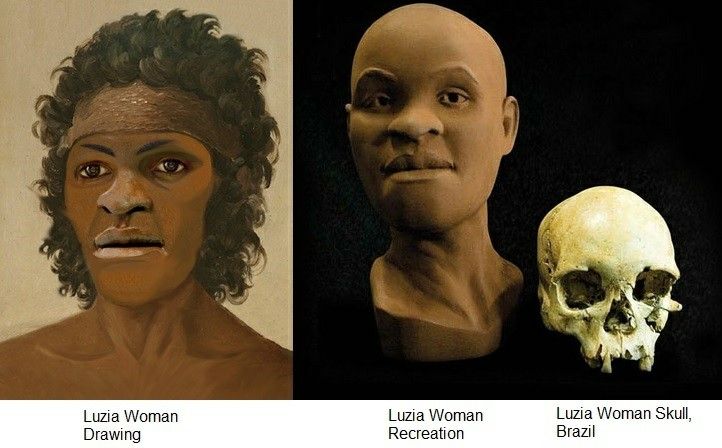 In 1973 scientists discovered a 13,000 year-old skeleton in a cave at Lagoa Santa, Brazil. The ‘Luzia Woman’ was the oldest human remains found in the Western Hemisphere. Curiously the Luzia woman’s skull resembled an Australian Aborigine more than a Native American. The Laranjal and Moraes skeletons of Lagoa Santa shared this trait. The Lagoa Santa people’s closest Amerindian relatives are the Yaghan of Tierra Del Fuego and the extinct Pericue of Baja California.

Some Amerindians carry DNA from Population Y. In 2015 scientists sequenced the genome of three Amazonian tribes – the Xavante (pictured), Karitiana and Surui, who were uncontacted until the 20th century. 1-2% of their DNA was shared with Australasians. Smaller amounts were also found in Mixe people of Mexico and Aleutian Islanders but no other groups. The findings were published in Nature. Population Y comes from Ypykuera – an Amazonian word for ‘ancestor’.

Less reliable evidence of a Proto-Australasian presence in the Americas:

Proto-Australasians or ‘Black Asians’ were the first homo sapiens to leave Africa and the original inhabitants of Australia and Southeast Asia. Their descendants include the Aborigines of Australia, the Negritos of Southeast Asia, Melanesians, and Andaman Islanders. Population Y would suggest they reached South America too.

There are five possibilities:

Theories 4 and 5 are the most credible. Although Australasians made it to Australia, there is little evidence their boats could traverse the Pacific. If Aboriginal Australians did not settle the Polynesian islands, how could they have sailed to South America?

Proto-Australasian settlement of the Americas is an exciting, if controversial, prospect but alas probably not true. As evidence, only the 2015 Nature study holds sway. In 2018 scientists sequenced Luzia woman’s DNA and found no traces of Proto-Australasian ancestry. Her distinct skull structure was the product of genetic drift. Similarly, no trace of Population Y has been found in the Yaghan or Pericue – at least not yet.  Until further evidence arises, the most likely scenario is the first bands to settle America had an Australasian component in their DNA.