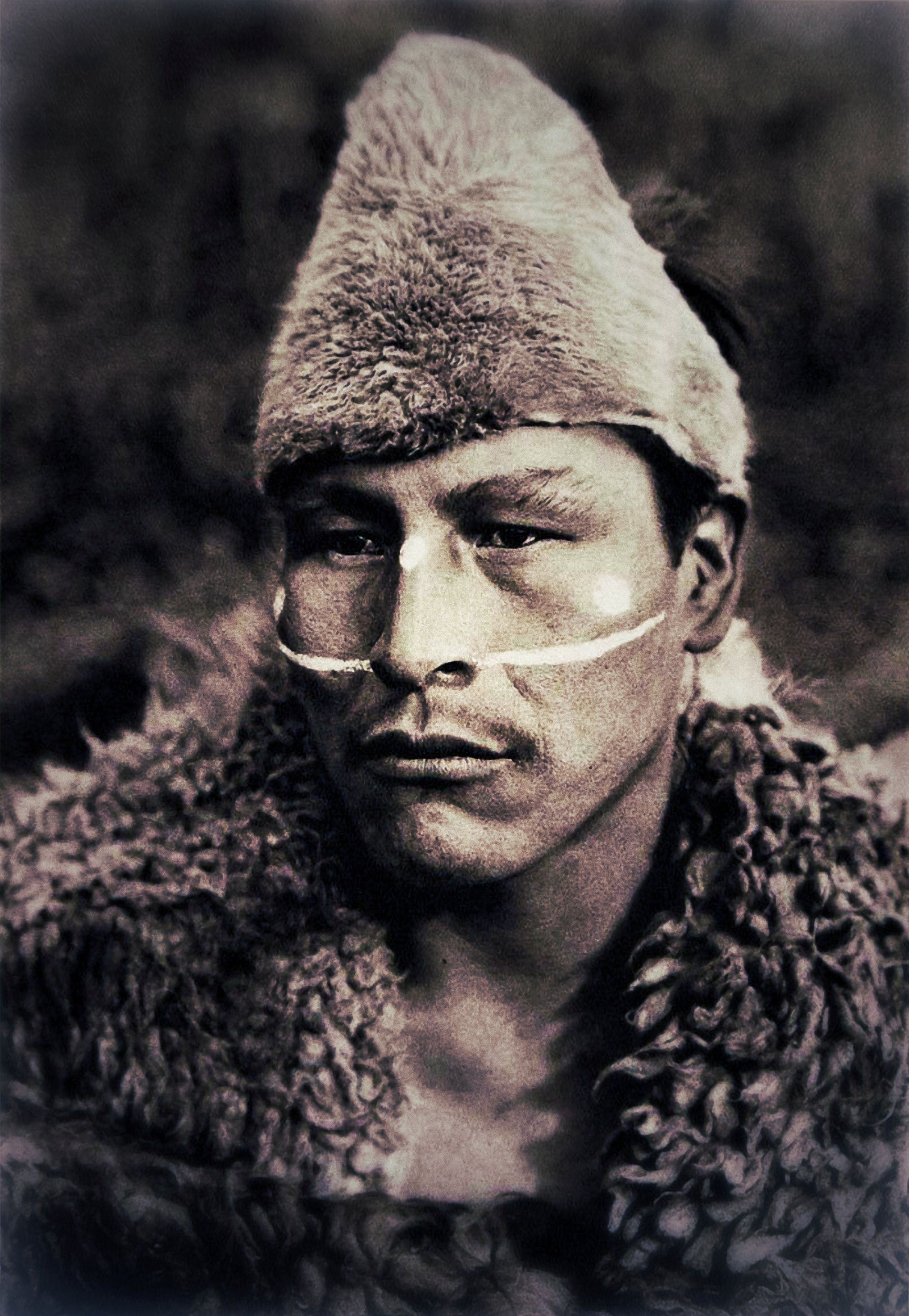 ‘Fuegians’ are what Charles Darwin called the indigenous people of Tierra Del Fuego, the islands at the bottom tip of South America.  An isolated population at the world’s end, Fuegians descend from the first people to inhabit the Americas. They were the southernmost population on earth.

Tierra Del Fuego is Spanish for ‘Land of Fire’. 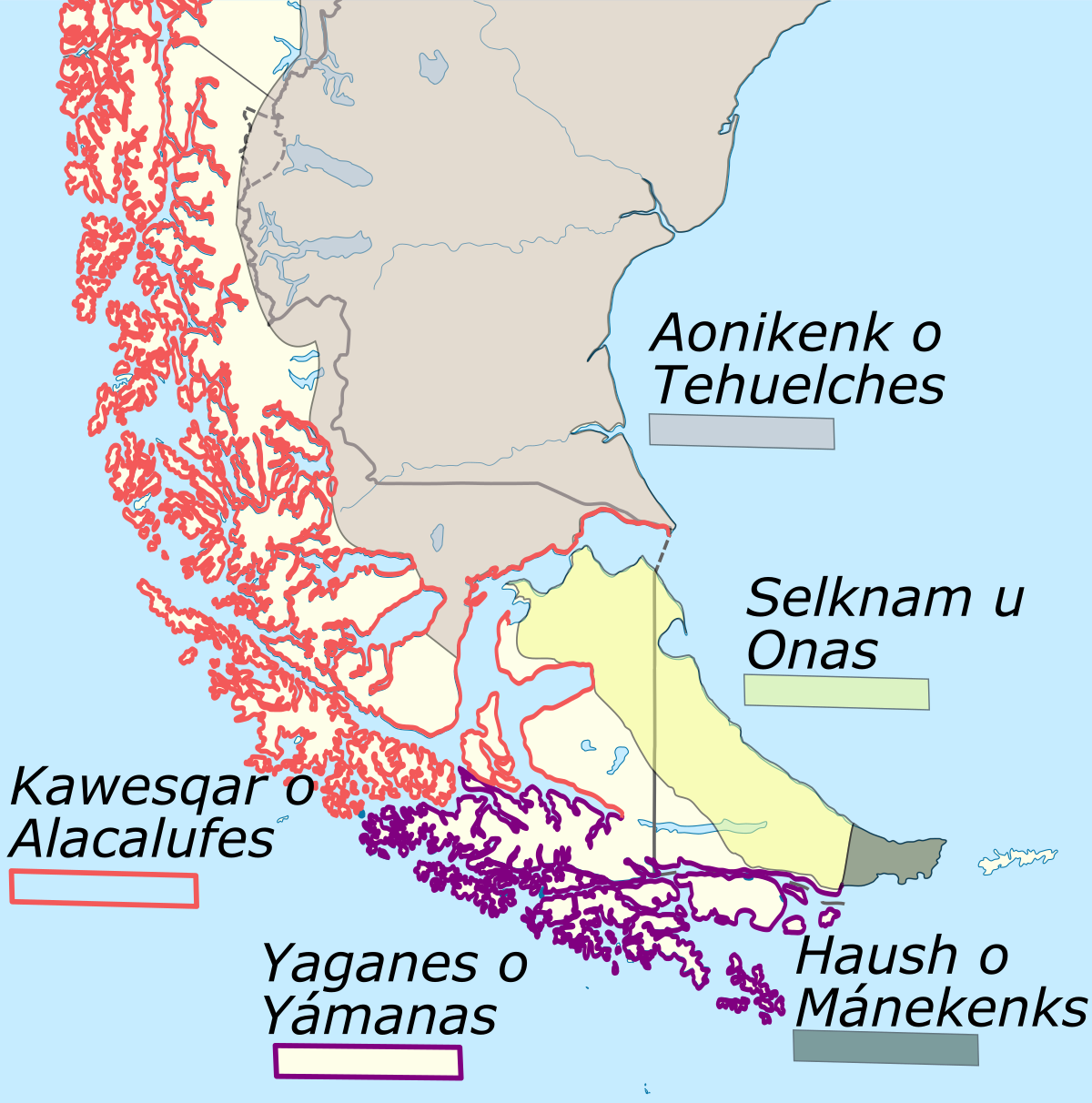 Ferdinand Magellan named it after the signal fires he saw dotting its islands when he sailed through in 1520. A desolate, windswept land where rain is incessant and temperatures reach -20, Tierra del Fuego is the closest landmass to Antarctica. Harsh winters prevented agriculture and restricted its inhabitants to hunter-gatherer lifestyles.

Though lacking in vegetation, Tierra del Fuego teems with wildlife including cormorants, penguins, sea lions, foxes, whales, seals, otters, and the guanaco, a cousin of the llama. The Selk’nam and Manek’enk lived on Isla Grande, the largest island – the Selk’nam in the inland plains and the Manek’enk on the western peninsular. The Manek’enk arrived first, followed by the Selkn’am, who pushed them to the island’s coldest corner. They spoke related languages and followed the guanaco herds, eating their meat, making clothes from their skin and bowstrings from their sinews.

Both peoples were notably tall – men averaged 6 feet, more than other Amerindians or contemporary Europeans. They celebrated an initiation ceremony called a ‘hain’, similar to the potlatches of the Pacific Northwest. 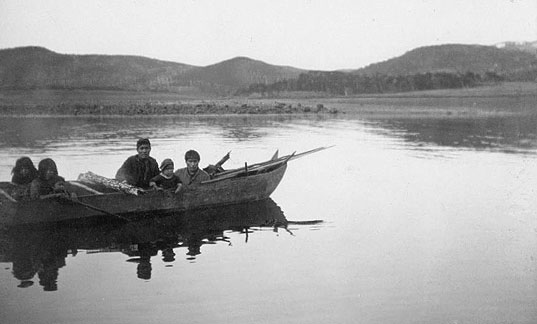 The Yaghan and Kawesqar were ‘sea nomads’ who travelled by canoe to and fro the smaller islands in search of seafood and stranded whales. Unlike the Selkn’am and the Manek’enk, the Yaghan were accomplished swimmers. Yaghan women dived underwater to forage for oysters and mussels while the men hunted birds and marine mammals with harpoons.

The Yaghan, despite living in freezing temperatures, wore minimal clothing, swam naked, and often slept in the open. For warmth, they used fires and lathered their bodies in animal fat. It is possible the Yaghan evolved warmer body temperatures in response to the cold.

Despite their similarities in lifestyles, the Yaghan and the Kawesqar both spoke language isolates and had little contact with each other, the Manek’enk or the Selk’nam.

Fuegians had no social structure or concept of property. Only shamans – healers and intermediaries with the spirit realm – held a place of privilege. 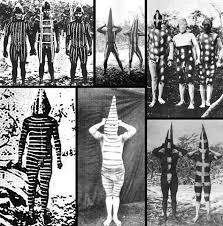 Fuegian ancestry is distinct from other Amerindians. Scant clues link them to ‘Population Y’, a mysterious group related to Melanesians and Australian Aborigines who may have lived in South America before Siberian hunters crossed the Bering land bridge 13,000 years ago. Selk’nam cave and body painting bore a striking resemblance to that of Australian Aborigines, as did the Fuegians’ eyesight, which Darwin observed far surpassed that of his crew.

Early European explorers left the natives alone. Passers-by like Magellan and James Cook were more interested in finding sea routes to Asia than colonising the cold islands. When the Beagle visited in 1829, Charles Darwin described his interaction with the Yaghan as ‘without a doubt the most curious and interesting spectacle I have ever beheld.’ 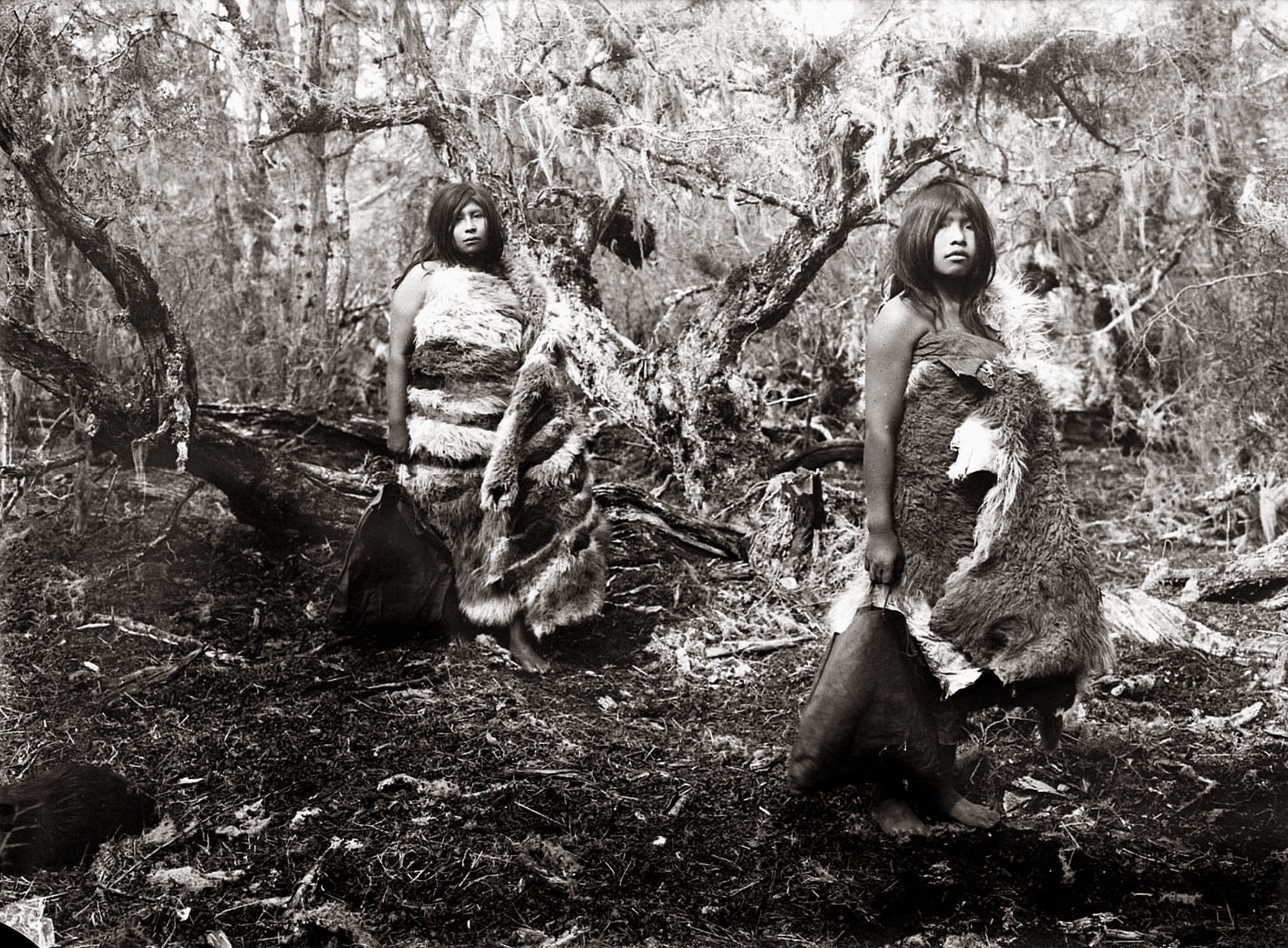 From 1840, the new nations of Chile and Argentina expanded into the region and encouraged European migration to stake their claims.  When they discovered gold in 1880, the trickle became a flood. The Chilean and Argentine governments offered free land to sheep farmers and prospectors on Isla Grande.

The Selk’nam met a cruel fate. As white colonists pushed them aside and thinned the guanaco herds, the Selk’nam hunted sheep instead – the strange ‘white guanaco’ who now roamed their hunting grounds. In retaliation, the colonial companies issued bounties – one pound sterling for every dead Selk’nam, half for a child. They accepted either a pair of ears, hands or a head as proof. For 15 years, headhunters massacred the Selk’nam and the Manek’enk with impunity. 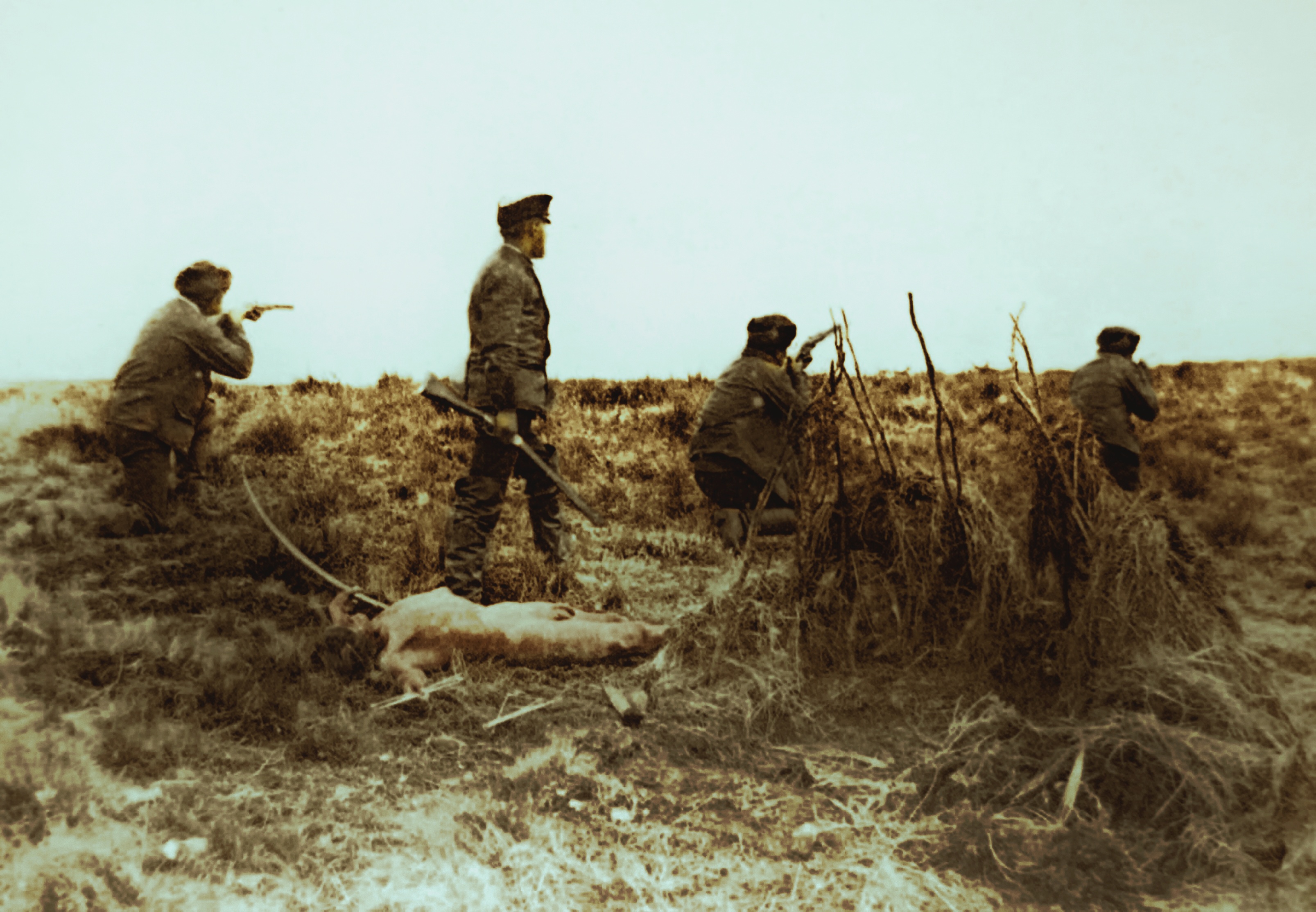 Julius Popper was the genocide’s chief perpetrator. Romanian by birth, this latter-day conquistador designed the layout of Havanna, Cuba, and built a fortune in Fuegian gold. Popper’s private army hunted the Selk’nam like animals, poisoned their food and shot them on sight.

The colonists killed 97% of the Selk’nam population. Survivors were resettled on nearby islands or shipped off to human zoos in Europe. In the 1920s a measles outbreak killed the remaining population. Though some 2,000 claim Selkn’am heritage today; along with the Manek’enk, their language and way of life is extinct.

The Yaghan and the Kawesqar hardly fared better. Sealing and whaling reduced their food sources and foreign disease took its toll. Today 2,622 Kawesqar (15 pureblooded) and one Yaghan remain.