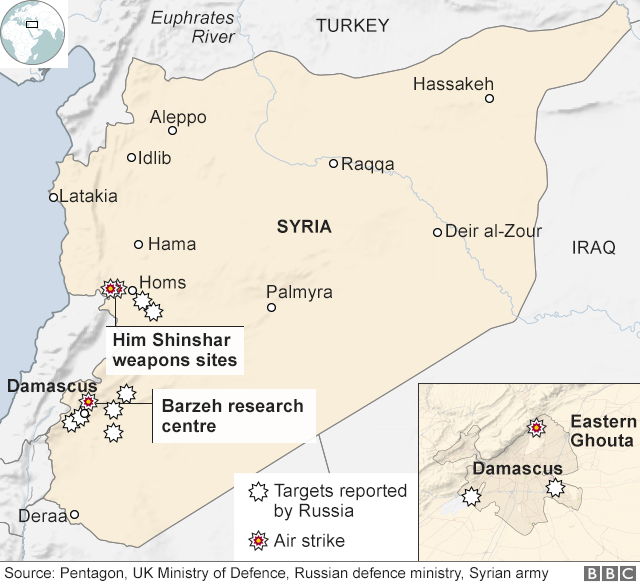 The press and social media is aflame this week over the joint surgical strike by 105 American, British and French missiles against chemical weapon facilities in Syria.  The attack was a response to the alleged use of chemical weapons by the Syrian Assad regime 9 days earlier, which violated international law and crossed the ‘red line’ set by Obama five years ago and by Emmanuel Macron in 2017.

The move is most controversial in the US. Donald Trump ordered the strike without congressional approval, which is technically unconstitutional, and alienated elements of his support base. Curiously both political opposition and support for the strikes crosses the partisan line.

The official narrative: On 7th April 2018 Syrian government forces broke international law by attacking the rebel held city of Douma with chemical nerve agents, killing 70 and injuring 500.  Videos circulated of men, women and children clutching gas masks in makeshift hospitals and foaming at the mouth.  The US state department confirmed the attack was real and Assad was responsible.

According to Russia and Assad the gas attack was a false flag operation by the Army of Islam, who holds Douma, and the White Helmets, volunteers who assist civilians in rebel territory. This was to provoke retaliation by the West against Assad, which worked as a charm. Note this narrative does not deny that chemical weapons were used.

Conspiracy theorists and the fringe media paint the attack as a text book false flag operation to justify intervention in Syria as was done in Iraq, Afghanistan, Libya, Vietnam etc. This view is shared by far right personalities like Alex Jones, hacktivist group Anonymous and innumerable posts on my newfeed.

Whether or not the gas attack did happen, or Assad was responsible, critics fear the strike could further entangle the US in Syria or, worse still, risk open war with nuclear armed Russia and Iran. The doomsday bells are ringing.

That said, the strike is restrained, and aligns with US policy. Despite Trump’s claims of ‘mission accomplished’, the mission was ultimately little more than a show of force. The Pentagon admitted it will unlikely deter future chemical attacks, while Syrian rebel groups criticised the strike as ultimately ineffective. There were no reported casualties.

The following spoke in support of the missile strike:

The following spoke against: 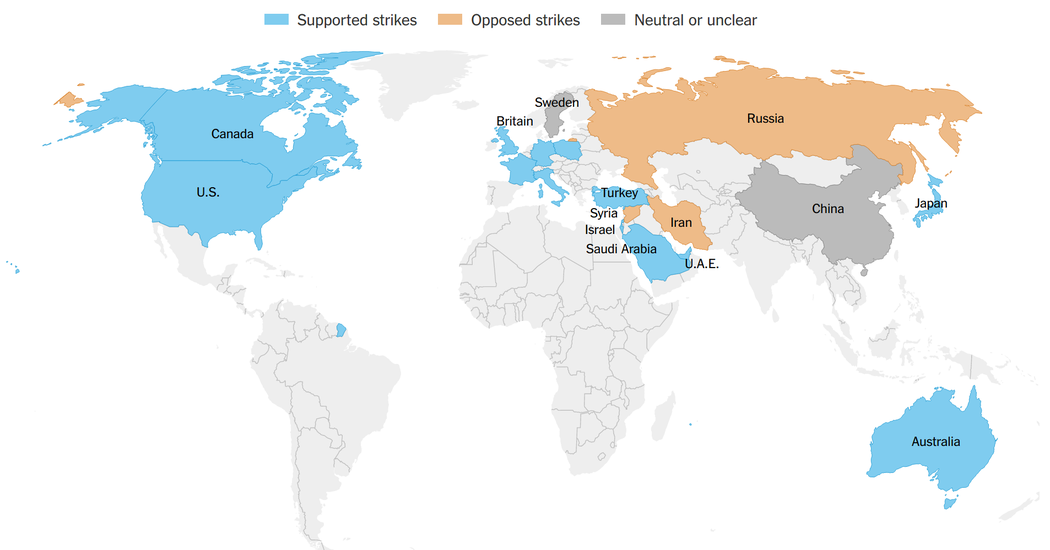 The strike is an indicator of the Trump Administration’s move from the America First support base which brought him to power. Just as Obama promised to withdraw from Afghanistan and Iraq in 2008, Trump promised to cooperate with Vladimir Putin over Syria and limit involvement to combatting ISIS instead of the Assad regime. Whilst his administration refrains from the no fly zone promised by the hawkish Hillary Clinton, the move seems out of touch with Trump’s anti-interventionist campaign rhetoric and particularly his earlier criticisms of Obama.

What will we get for bombing Syria besides more debt and a possible long term conflict? Obama needs Congressional approval.

The alt right blogosphere in particular, who normally stand by Trump’s every action, has lost faith in their hero.

This has happened before: Assad was previously accused of gassing civilians in Ghouta in 2013 and Khan Sheikhoun one year ago. The US responded to Khan Sheikhoun with a missile attack at weapon facilities in Sharyat. Although a few more missiles were fired this April so far the result has been little different than it was last year, except less people were killed. That strike was the first notable rift between the alt right support base and establishment Republicans, as represented by Steve Bannon and the ‘globalist’ Jared Kushner. Bannon has since been fired.

The US has admitted removing Assad from power is not on their agenda anymore. If the powers that be truly wished to instigate WW3, their response to the Douma attack would have been swifter and more aggressive. Given what happened last year, as it stands we are hardly at the brink of Armageddon.