50 years ago, on the 16th March 1968,  100 American GIs of the 23rd Infantry Division slaughtered 500 men, women and children in the village of Son My, South Vietnam. The soldiers herded the unarmed civilians into ditches and opened fire. Others went from house to house gang-raping the younger women. Houses and granaries were burned, the water supply defiled and bodies scalped and mutilated. Not even the livestock were spared.  Despite the death toll no weapons were seized and no Americans killed. The perpetrators claimed they were ‘just following orders’.

Son My, or ‘Pinkville’ to the US military, was a network of rural hamlets in the contested Quang Ngai province, a Viet Cong stronghold and the presumed base of operations for the notorious 48th battalion. Whilst the Saigon government controlled the cities of the south and benefited from US armaments and military support, the Viet Cong fought from the jungles and rice paddies of the countryside, drawing supplies and recruits from sympathetic villages like Son My.

The US strategy was ‘search and destroy’. Mobile helicopter-based squadrons sought out enemy hideouts, destroyed them and retreated to friendly territory. Success was measured by ‘body count’.

The 23rd ‘Americal’ Division was tasked with regaining the advantage lost in the Tet Offensive of January 1968. In the leadup to My Lai, Charlie Company lost 28 men, mostly to land mines, booby traps and sniper fire. They itched for revenge.

When Charlie Company assaulted the hamlets of My Khe and My Lai 4 they were expecting to engage the 48th battalion. Captain Ernest Medina, informed his troops that, with all innocents supposedly at the market, those who remained would be ‘either Viet Cong or Viet Cong sympathisers’.

Colonel Barker, the task force’s commander, gave orders to ‘neutralize the area’; destroy the houses, food supplies, wells and tunnels. No mention was made of the village’s inhabitants.

At 7.30 AM, first the artillery and then the gunships opened fire on My Lai 4. The first recorded ‘hostile’ casualty was an old man running from his home, arms waving. By 8.40 the ground troops had landed and were forcing the villagers into ditches. Overhead, the gunships rained death upon anyone who dared an escape. By 9.40 the reported kill count ended at 138 dead ‘Vietcong’. At 11.00 the task force stopped for lunch then continued the slaughter. 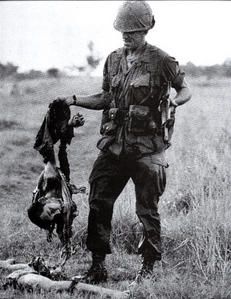 Although not every soldier in Charlie Company partook in the killing, not one reported or attempted to prevent it.

“I became absolutely convinced that as far as the United States Army was concerned there was no such thing as murder of a Vietnamese civilian. I’m sorry, maybe it’s a little bit cynical. I’m sure it is, but that’s the way the system works.”

Noticing the plumes of smoke, Major Hugh Thompson of the 123rd Airborne division landed his helicopter at the scene. He witnessed corpse-filled ditches and Captain Medina shooting an unarmed woman at point-blank. Thompson threatened to open fire if Medina’s men continued the killing. Reluctantly they complied, and he evacuated the survivors.

Knowing it would reflect badly, the division command covered the incident up and instead touted it as a victory. Journalist Seymour Hersh broke the story to the American public. His 1969  New Yorker piece exposed the full horrors of the massacre and the men responsible.  He heard of the event from GI Ronald Ridenhouer, who had pieced together the evidence independently reported it to the Pentagon. Hersh extensively interviewed the soldiers and officers of Charlie Company. His story won him the Pulitzer Prize for investigative journalism and contributed massively to the antiwar movement.

Because he testified, Hugh Thompson’s comrades shunned him as a traitor and departed mess halls at his entrance. The US military did not recognize his heroism until 1998, 30 years later, when he and his two crewmates were awarded the Soldiers Medal. Thompson lived the rest of his days plagued by substance abuse and PTSD.

A single officer, Lieutenant William Calley, was quietly charged with the murder of 22 civilians and sentenced to life imprisonment. 69% of the public believed Calley was unfairly scapegoated, however, and President Nixon intervened. He reduced Calley’s sentence to three and a half years of house arrest. 26 other soldiers, including Captain Medina, were court-martialed. All were acquitted the following year.

“We didn’t believe this would be such a publicity stunt. We felt this was happening many times before, and it had probably happened many times since.”