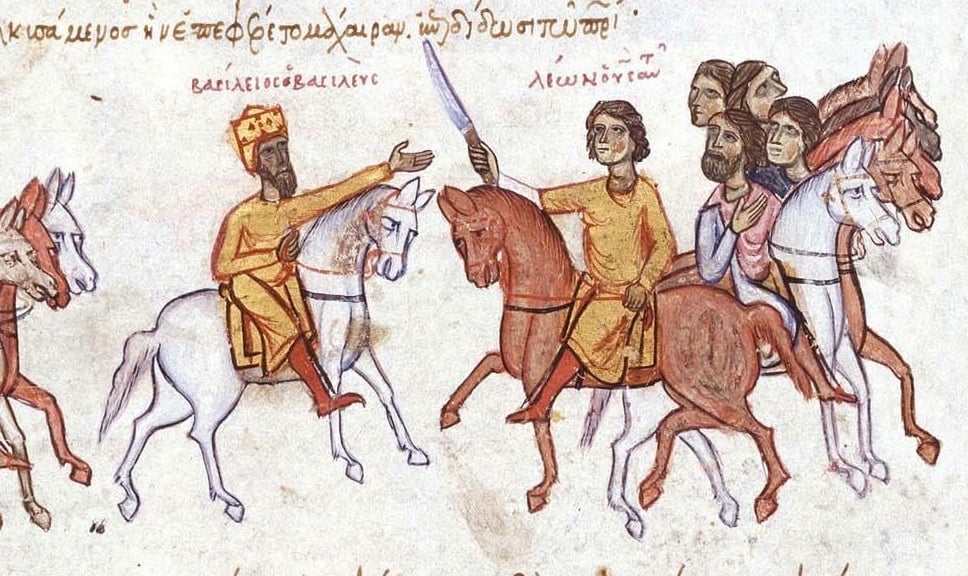 Basil I (811-886 AD) was the 50th ruler of the Eastern Roman (Byzantine) Empire. His story is remarkable: He was born a peasant, spent his formative years a slave and died an Emperor.  Basil’s 19 year reign was a golden age of Byzantine resurgence, peace and prosperity. He is regarded as one of their greatest leaders.

Basil was born in eastern Thrace, modern day Turkey, in the then province of Macedonia, to an Armenian family. Greek, the Byzantine Empire’s spoken tongue, was his second language and he maintained a heavy accent throughout his life.

In the early 800s the Byzantine Empire was in decline. Years of civil war over the violent iconoclast movement had sapped the once proud Empire, a weakness exploited by Bulgars in the north and the Arabs in the east. In 813 the Bulgar Khan Krum invaded Thrace and enslaved thousands, including two year old Basil and his family.

Basil spent his next 23 years a slave in Bulgaria. He escaped to Constantinople in 836 and slept his first night in the antechamber of a church.  Nicolas, the local monk, noticed and allegedly had a vision proclaiming that this striking vagabond would one day sit on the throne. Eager to assist, Nicolas found Basil employment as a horse groom, a role in which he excelled. Basil travelled frequently with his new master and one day caught the eye of Danelis, a wealthy Greek noblewoman. She bestowed a generous fortune on the handsome young man, and assisted in his rise, a favour he would later repay in kind.

On returning to Constantinople Basil gained a reputation for both his physical prowess and skill in taming horses. Once, while watching a wrestling match he was invited to take on the reigning champion, a Bulgarian.  Basil defeated him with ease.

News of his victory spread rapidly around the capital, eventually reaching the ear of the reigning emperor, Michael III. After Basil successfully tamed the Emperor’s unruly new horse, Michael was so impressed he granted Basil a slew of government positions and made him the new court favourite.

The Emperor grew to trust Basil so much, that when Basil convinced him his uncle Bardas was plotting treason he had Bardas killed. Believing Basil had saved his life, Michael III adopted Basil and appointed him co–Emperor.

A few years later Michael had a new favourite and Basil began to fall from favour. In 867 he murdered Michael and seized the throne.  In just six years since his liberation, Basil the Macedonian had ascended to the highest office in the Empire.

As Emperor, Basil I proved effective. He reversed the war with the Abbasid Caliphate in the East, who just forty years before had besieged Constantinople, and destroyed the Paulicians, their troublesome allies in Armenia.  The Adriatic was cleared of pirates and Cyprus and southern Italy were retaken from the Arabs.

At home, Basil settled church disputes and introduced a new law code, the Basilika, which remained until Constantinople’s fall in 1453. He also oversaw the ‘Macedonian Renaissance’ a revival in Byzantine artistry that lasted well beyond his reign. Basil made peace with the Bulgars by converting them to the Orthodox Christian Faith. His success undoubtedly owed to Basil’s familiarity with Bulgarian culture – he grew up there after all.

Emperor Basil’s one mistake was the fall of Sicily. When the Arabs attacked the capital at Syracuse he requisitioned ships to carry marble for a church project instead of providing relief.

Basil’s cruel streak that won him the crown also spilled into personal relations: he beat his scholarly son Leo and imprisoned him for three years, regularly threatening to gouge out his eyes.

In 886, aged 75, Basil was out hunting when a deer’s antler lodged itself in his belt. The deer dragged the emperor through 25 kilometres of forest before a local saved him. Before his wounds could be properly treated Basil had the man executed in paranoia. He died from the infection soon after. Basil’s hated son, Leo the Wise, ruled for the next 46 years. The Macedonian dynasty lasted another 200.

2 thoughts on “Basil the Macedonian”